A note about X-rays

Radiographs, or “x-rays” are a useful diagnostic technique often employed by vets, alongside gait analysis and nerve-blocks when dealing with lamenesses in horses. One of the common reasons for taking radiographs is for the diagnosis of laminitis. When taking x-rays of hooves for such a purpose, it is really useful to mark the hooves with something that blocks the beam from reaching the x-ray plate and makes a bright white mark on the film , this is known as a radiopaque marker. 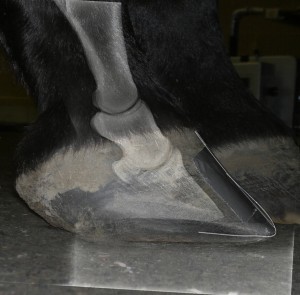 A piece of wire duct-taped to the hoof wall and sole works very well as a marker, or better still, vets often have barium paste that can be painted on to the foot, then wiped off afterwards. The best markers start at the true hairline, where skin meets hoof, run all the way down the wall, wrap around the toe, run along the sole and stop at the tip of the frog, commonly, a farrier’s nail is used to mark the wall and a drawing pin to mark the frog, but these have draw-backs that I will discuss later. It is also very useful to have the ground line marked in some way.

A well placed marker can show:

From these, we can tell whether the pedal bone has sunk or rotated, by how much and how thin the sole is. If the marker is placed in the centre of the toe we can also tell if the x-rays have been taken at the correct angle. 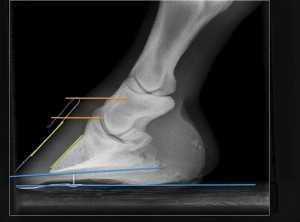 Once we have a correctly marked up hoof, with a well taken radiograph, we can analyse various things on the foot.
This image shows: 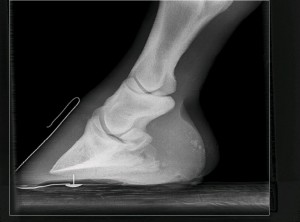 Here, the long shaft of the pin is very close to the sensitive tissues of the sole.

As I mentioned above, using a nail and drawing pin is a common method of marking hoof walls for radiographs. The image on the left shows such a method of marking a foot. A farrier’s nail due to its shape does not sit flush on the hoof wall and therefore does not allow complete visualisation of the shape of the wall.A major drawback of using a drawing-pin to mark the frog is that in the case of a thin-soled horse, there is serious risk of penetrating underlying soft tissues with the point of the pin, if it isn’t shortened first.